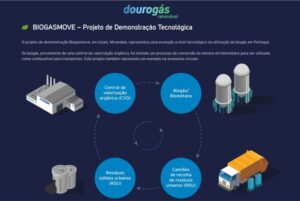 The first truck to use 100% renewable natural gas for vehicles (CNG) will arrive on Portuguese national roads in early September. On the 8th of September, Dourogás GNV, in collaboration with HAVI, will take another step forward in the decarbonization of the economy, promoting the first refueling of heavy vehicles with biomethane from a fully renewable source at the Santo António dos Cavaleiros filling station .

The biomethane to be incorporated at the Dourogás filling station in Loures comes from the pioneering proof-of-concept project that allows the production of 100% renewable natural gas from the anaerobic digestion of organic waste. Biogasmove has already made it possible to supply a fleet of vehicles of the intermunicipal company Residuos do Nordeste from the biodigestion and energy recovery of the organic matter collected by these same vehicles, fully responding to the design of the Circular Economy.

Recently, a partnership was also established with Águas do Tejo Atlântico, in order to initiate a concept demonstration project with a view to the production of biomethane from the sludge produced in the Wastewater Treatment Plants (WWTP).

With the demonstration of the possibility of incorporating biomethane in the CNG supply system, Dourogás reaffirms its priority and commitment to renewable gases, such as hydrogen and biomethane, on which the Group's research and development efforts are concentrated, in this regard, to overcome the challenges of the energy transition that the country and the world need.