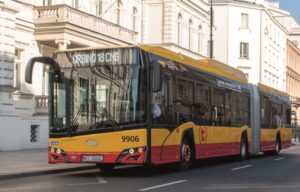 Tallinn transport operator Tallinna Linnatranspordi has ordered a total of 100 CNG buses from Solaris Bus & Coach. The contract announced on December 10 is worth €27 million.

Solaris Bus & Coach won the tender for  the 100 eco-friendly compressed natural gas (CNG) city buses announced in the capital of Estonia. This is the second largest, one-off contract for vehicles of this type won by the Polish manufacturer.

Due to the implementation of the current order, Estonia will become the 14th European country to which Solaris will deliver its compressed natural gas buses. Nearly 1,200 low-emission Urbino using CNG fuel outside the domestic market of the manufacturer went to, among others, Germany, Norway, Sweden, the Czech Republic, Italy, the Netherlands, Spain, and France.

The low-floor buses will all be fitted with a Cummins ISLG6C320 239 kW engine and five roof-mounted gas storage cylinders with a capacity of 315 litres each. As well as a cold start function that enables the engine to start at low temperatures, the vehicles will be equipped with air-conditioning, USB sockets, a passenger information system, and five internal and two external CCTV cameras. The order will be carried out between September and November 2020.