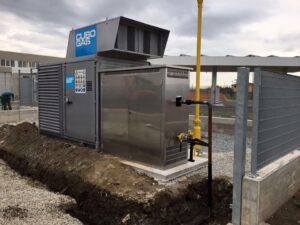 Snam’s subsidiary Cubogas, which specializes in technological solutions for CNG (compressed natural gas) filling stations, was awarded the construction of two new natural gas fueling stations for buses for RATP, the Parisian transport company operating in the Île-de-France region.
This confirms Cubogas’ international vocation as a market leader in Italy and one of the main operators in the sector abroad.

The orders include the installation of six compressors in locations near the French capital to supply around 400 buses that run in the Paris metropolitan area using natural gas. The new plants will be up and running by the end of 2020. The total value of the contracts amounts to approximately 2 million euros.

This will enable Snam to make a tangible contribution to the decarbonisation of public transport in Paris by promoting widespread use of natural gas.

In Italy, Snam plans to build around 150 new filling stations providing natural gas and biomethane (renewable gas produced from organic waste and agricultural and agro-industrial waste) by 2023, with an investment of 50 million euros, strengthening the country’s European leadership in this sector.

To date, the subsidiary Snam4Mobility has delivered eight plants and contracted a further hundred. In total, Snam’s investments in sustainable mobility, which also include the construction of two small liquefaction plants (Small-Scale LNG) for heavy transport, will amount to 100 million by 2023. (read here)