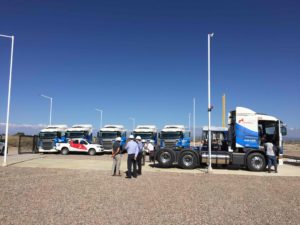 This decree, together with regulation NAG 451 published last January, is intended to enable the replacement of diesel fuel by natural gas in buses and trucks.  Despite having close to 2 million natural gas vehicles and almost 2000 CNG fueling stations, the use in trucks and buses is practically non-existent in the Country. National regulations in Argentina have been mainly focused in after-market conversions of gasoline cars, making it practically impossible for OEMs to manufacture natural gas powered models, and totally impossible to import any kind of NG units. It must be noted that around 70% of the vehicles sold in Argentina (gasoline and diesel) are imported.

Iveco and Scania have already registered with the National Gas Regulatory Authority (ENARGAS) to be able to import gas trucks and buses. Today's decree reduces import duties from 35% to between 2 and 5%, bringing both a clear signal of support from the Administration and an economic incentive to the users.

Global Gas Mobility has been working closely with IVECO and SCANIA, and also in collaboration with ENARGAS and Government officials in promoting the use of Natural Gas in the transportation sector.

Argentina urgently needs to increase and guarantee the demand for Natural Gas, in response to the increased shale gas production from Vaca Muerta, in the Patagonia. Use of gas (CNG and LNG) in transport is expected to provide a fast, season-insensitive, increase in demand. Shale gas from Vaca Muerta covers around 38% of the demand in the Country, and has allowed Argentina to restart exports to Chile and cancel the operation of the import terminal in Bahia Blanca. It has also allowed the first ever LNG export from the same port, through the floating liquefaction vessel TANGO, operated by Exmar.