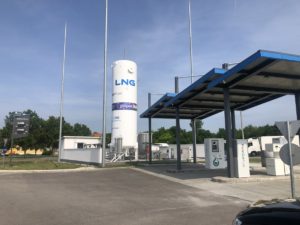 The first LNG refuelling station in Hungary opened last Monday around the southwest edge of Budapest.

Thanks to the new facility, Hungary joins the Trans-European Transport Networks (TEN-T), prolonging one corridor by 550 kilometers, and another by 420 km. Hungarian haulage companies can now use environment-friendly vehicles running on LNG, with a range of up to 1,500 km

Truck drivers going through Hungary powered by LNG will now be able to fuel up. The station was built as part of the PAN-LNG project, which was selected as a supported project of the Connecting Europe Facility (CEF), a key EU funding instrument to promote growth, jobs and competitiveness through targeted infrastructure investment.

The station offers premium-quality LCNG fuel for vehicles running on gas (CNG or LNG), while climate-neutral BioLNG is also in the selection.

Within the framework of the PAN-LNG project, work has also begun on a domestic LNG-producing plant, which will provide an even better supply for the station, the press release adds.

The total costs of the project amount to EUR 1.2 million, 85% of which came from EU resources.