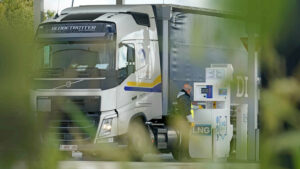 One of the ten largest transporters in Belgium has decided to switch to  using Volvo's FH LNG for the first time.

Distrilog, a group of companies owned by the Salaerts family, is one of the most dynamic Belgian transport companies of this decade. Through organic growth and some strategic acquisitions, Distrilog has conquered its place as one of the spearhead companies in the distribution sector. The company consciously opts for long-term relationships. The choice for Volvo FH LNG is therefore anything but random.

"We only work from Belgium," says Philippe Salaerts, Operations Director at Distrilog. He refers to the most important growth steps of the family group: “In 1991 we started taking over a company. We then employed 15 people and three customers. Yet we prefer to give our company a name that speaks for itself than our family name.

Thanks to a three-yearly strategy review, the group grew from 15 to 150 million euros in 15 years' time. Philip Salaerts: “That happened through the takeover of the logistics departments of a number of customers and competitors. The most striking was the acquisition of Colfridis in 2016. Such an acquisition takes time, but three years later we are where we need to be."

Two years ago, Philip Salaerts began to take an interest in alternative fuels for his truck fleet: “The world is changing, the climate problem is becoming increasingly important, and new technologies are emerging. We tested an LNG tractor in 2015, but the power was absolutely insufficient. Moreover, Kallo was then the only LNG gas station in Belgium. I contacted Volvo Trucks and they introduced me the new FH LNG. Before I made the leap, I wanted to test that new technology in real circumstances. We did a test in November 2018 and the reaction of the drivers was unanimous: that is just a normal truck.

Specially trained drivers have started using ten Volvo FH LNG tractors. Of course I remain careful, but the first consumption results are already slightly better than expected. As a result, we earn back our investment faster than the three years calculated in advance. "

To optimally use the FH LNG, Distrilog uses them on the longest routes and in situations where every day two separate drivers can take the trucks on the road. The vehicles can now refuel in five different places. This year another gas station will be added in Londerzeel and it will be even easier. Philip Salaerts is already planning to expand the scope of his Volvo's FH LNG to the more traditional transports to Luxembourg. The real autonomy of 800 kilometers allows that perfectly.

Distrilog uses its trucks for a long time. Philip Salaerts is therefore not very concerned about their residual value. "The investment is certainly profitable at the moment."