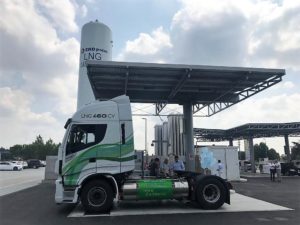 The station is strategically located in an area with a strong industrial and logistic focus 300 meters from the  A4 motorway exit  of Agrate Brianza, on the route linking Milan to Trieste.

Built on an area of ​​8,000 square meters, the facility will supply fuels for all types of vehicles: petrol and diesel by means of two multi-product dispensers, methane, LPG, electric car fueling points and, through a 60 ton LNG storage tank, also liquefied natural gas for the refilling heavy road vehicles. Two IVECO vehicles, a Daily NP CNG and a Stralis NP 460 LNG, were made available by the local reference concessionaire, Tentori VI SpA for fueling demonstration

“With the new Agrate Brianza plant, the number of LNG service stations we supply adds up to  8. Another 5 LNG service stations are at an advanced stage of construction and will be open by the end of 2019, while important projects are being evaluated. A tangible fact that demonstrates our commitment to creating the conditions in favor of the maximum diffusion of a fuel that represents the future of sustainable heavy transport, "said Massimiliano Naso, Liquigas SpA Head of Sales for Italy, Large Customers and LNG