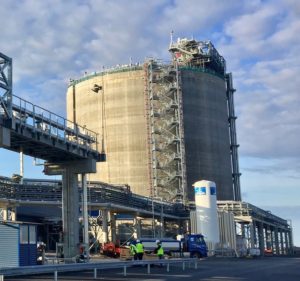 The biggest liquefied natural gas (LNG) terminal in the Nordics was opened today June 11 in Röyttä harbour, Tornio. The new terminal answers to the growing demand for low emission LNG and strengthens LNG’s security of supply in the Northern Nordics. The new terminal significantly enhances the area’s competitiveness by ensuring the availability of energy that is affordable, has low emissions and can be used by the local industry, as well as maritime and heavy-duty traffic.

The deployment of Tornio’s new liquefied natural gas (LNG) terminal will ensure shipments to Northern Finland and Sweden. The terminal is the result of multiple companies working together for several years through Manga LNG, a Joint Venture consisting of Outokumpu and SSAB steel companies, EPV Energy and the energy company Gasum. Wärtsilä was selected as the main contractor.

“Tornio terminal is a ground-breaking collaboration between several companies and its opening is a long-awaited milestone for all of us. The deployment of the new LNG terminal significantly supports the emission goals of Finland, as well as the entire Nordics. The shift to cleaner fuel solutions is a worldwide trend that needs to be accelerated in every way possible. With the use of LNG, we reduce the local pollutant emissions of maritime and heavy-duty traffic, while keeping the industry of Northern Finland competitive by offering energy that has low emissions and is affordable to the needs of different operators,” states Kimmo Rahkamo, Vice President, Natural gas and LNG, Gasum.

“Tornio’s LNG terminal is the biggest in the Nordics. Previously, the only LNG terminal in Finland was in Pori – some 600 kilometres to the south. The Tornio terminal is equipped with bunkering stations for LNG vessels, regasification equipment for liquefied natural gas, as well as a storage unit that is 50,000 m3 in volume,” says Mika Kolehmainen, Chief Executive Officer, Manga LNG Oy.

The global demand for LNG is growing at a fast pace

The number of vessels that utilise LNG as a fuel in maritime traffic is growing globally. Rahkamo believes that the new terminal will attract even more operators to utilise LNG.

“The transition to a carbon neutral future does not happen overnight which is why each step is important. Building distribution infrastructure will make it easier for new operators to start using LNG. In the future, the same gas infrastructure can be used to shift to the use of liquefied biogas (LBG), which will further reduce emissions,” states Rahkamo.