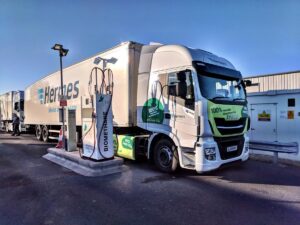 Hermes' 160 CNG trucks will represent around 50% of its large truck fleet, and they will approximately reduce its annual CO2 footprint by some 24,000 tonnes.

Hermes has additionally confirmed plans to trial the IVECO Eurocargo, a 12-tonne van that runs on CNG, across routes in central London. The firm’s central London routes are already served by an electric fleet, but it said in a statement that many retail clients in the capital are also seeking an alternative fuel option. Details of the trial’s length and scope have not yet been revealed.

Hermes’ head of fleet David Landy said: “Sustainability is a huge focus for us as we recognise our responsibility as one of the UK’s largest consumer delivery companies. We are committed to putting sustainability at the heart of every aspect of our business, through innovative products and processes.

“As such, we were an early adopter of CNG as an alternative fuel and are continuing to increase its presence in our fleet, to drive down emissions.”

Hermes’ parent company is Otto Group. Last year, Otto Group announced an ambition to become a carbon-neutral business by 2030, after delivering an ambition to halve Group-wide emissions between 2006 and 2020.

Otto Group has repeatedly stated that it will “pursue CO2 avoidance and reduction” before turning to carbon offsetting. It has not yet applied to the Science-Based Targets Initiative (SBTi) with new reduction goals.

The announcement from Hermes comes after the UK Government unveiled its Transport Decarbonisation Plan last month. This policy package is designed to support businesses and other actors across the value chains for all modes of transport to achieve net-zero by the legally binding 2050 deadline.

Included in the Plan is a commitment for the sale of new diesel and petrol heavy goods vehicles (HGVs) to be banned in the UK by 2040. The Department for Transport (DfT) will consult on proposals to phase out polluting vehicles weighing between 3.5 tonnes and 26 tonnes from 2035 and those weighing more than 26 tonnes from 2040. It has stated that earlier dates will be set if the private sector agrees that a faster transition is “feasible”.