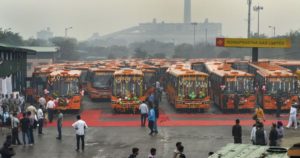 Delhi Chief Minister Arvind Kejriwal, along with Deputy Manish Sisodia and Transport Minister Kailash Gahlot, on Thursday delivered the third lot of 100 new standard floor CNG buses. The target of AAP Government is to deliver 1,000 buses by end of the year.

The buses which will give a sigh of relief  to the commuters in Delhi are especially designed for handicapped people. The orange colored standard floor buses are equipped with ultra-modern facilities such as GPS trackers, panic buttons, CCTV camera, and hydraulic lifts for the convenience of the handicapped.

Out of the targeted 1,000 buses, the Government has already put in service 229 buses. Further, a total of 3,000 lower floor buses, (1,000 electric + 2000 CNG) is expected to hit the roads of Delhi by mid 2020.  "Delhi is being recognised all over the world for quality education, health, we are also trying to strengthen our transportation system. 3,000 buses will hit the roads of the national Capital in the next 6-7 months. The buses are equipped with all modern advancements for the safety of the commuters," said CM Kejriwal.

The newly launched buses are 37 seater and installed with 14 panic buttons inside the bus. Besides, three CCTV cameras are also installed inside the buses. The buses will run on seven routes from Narela to Mori Gate Terminal, Palla to Old Delhi Railway Station, Nilwal to Karampura Terminal, Uttam Nagar Terminal to Jawaharlal Nehru Stadium, Narela to Old Delhi Railway Station, Adarsh Nagar to Central Terminal and Nangloi to Narela.