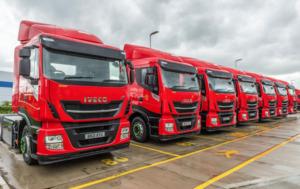 UK's Royal Mail is expanding its use of low emission vehicles, with the addition of 29 gas-powered trucks. The IVECO Stralis NP 460 CNG will be fuelled with Compressed bio-methane (Bio-CNG), for an even greater care to the environment. This is an example of the Company’s ongoing commitment to reduce emissions associated with its operations.

Over the course of coming weeks, the trucks will be introduced to the Company’s fleet in the North West of England, in addition to the two already in operation.

At 40 tonnes, the gas-powered trucks, fuelled by Bio-CNG, are a similar size to a typical Royal Mail Heavy Goods Vehicle (HGV). They are well designed to carry mail and equipment of all shapes and sizes and can be used on most roads and highways.

The vehicles can travel up to 640 kilometers at a time and are designed to help Royal Mail transport letters and parcels securely, while reducing any associated carbon emissions. Additionally, in the UK, Bio-CNG fuel can be significantly cheaper than diesel.

Gas powered vehicles were originally tested by Royal Mail in 2017. Following a successful trial, two trucks were introduced to its fleet on a permanent basis in 2019-20. It is estimated that these two trucks alone have saved the Company approximately 107 tonnes of CO2e annually.

With the UK's largest "Feet on the Street" network of over 85,000 postmen and women, Royal Mail already has the lowest reported CO2e emissions per parcel amongst major UK delivery companies.

The trial and potential introduction of alternative fuel vehicles, such as gas-powered trucks, help the Company inform its long-term environmental strategy, and to meet its goals of delivering a cleaner future.

The use of Bio-CNG in a vehicle can reduce CO2e emissions by around 84 per cent, compared to an average diesel vehicle. Bio-CNG fuelled vehicles also offer a 99 per cent reduction in particulate matter, compared to their diesel equivalents.

Bio-CNG fuelled vehicles generally have a similar refuelling time to diesel and can travel considerable distances. They are also significantly quieter than traditional diesel vehicles.

James Baker, Chief Engineer and Fleet Director at Royal Mail said: “As a Company, we are committed to making changes to our operations that reduce our environmental impact. Bio-CNG is a significantly more cost effective and lower carbon alternative fuel to diesel for Heavy Goods Vehicles (HGVs). These vehicles enable us to deliver large payloads of parcels in the most environmentally-friendly way possible.”

Postal Affairs Minister Paul Scully said: “Tackling climate change is a truly national effort, so it’s great to see Royal Mail doing its bit to cut down on emissions from its fleet. Innovations like this are crucial to ensuring we build back greener from the pandemic, and customers will be pleased to know their post and parcels aren’t costing the earth.”