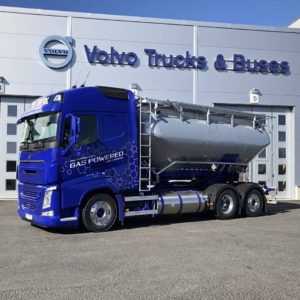 With Sweden's first gas-powered bulk car for cement deliveries, Cementa is now taking a step towards greener transport. It is a future-oriented initiative that links to our high ambitions in sustainability, ”says Mikael Odlöw, Deputy Sales Manager at Cementa.

On the side of the new Volvo truck we printed :"We drive on gas for reduced climate impact - Cementa". The truck is now being put into traffic for Cementa's operation; it is a blue-lacquered Volvo FH460 LNG, operating mainly from Cementa's factory in Skövde as its main base, and delivering cement to the company's customers in Western Sweden.
- With Volvo's newly developed technology, gas operation with LNG (liquefied natural gas) is one of the most efficient and quick ways to reduce carbon dioxide emissions in heavy transport. Instead of being fueled with diesel, the truck's internal combustion engine is operated with LNG, says Anders Läth, traffic manager bulk at XR Logistics.

Today, typically Swedish vehicle gas consists of 50 percent biogas and 50 percent natural gas, but if access to biogas increases in the country, the renewable proportion can be even higher. Therefore, investments in gas-powered trucks are often seen as an important way to reduce the heavy transport sector's climate impact.

Other environmental benefits of gas compared to diesel are that a gas engine emits fewer particles, less nitrogen and less noise.
- It feels nice to be able to present this solution, and although it is only one truck initially, we hope that several of our carriers can follow this decision to reduce their climate impact, says Mikael Odlöw.

The gas-powered truck is owned and operated by Tommy Bremans Åkeri AB in Skövde, a supplier to XR Logistik AB.